Anybody that knows my command line habits, or me in general, knows that my memory could be better. It can be good when I need it to be, however, if I don’t have to remember a thing I’m writing it down. This is why I built my DAE scripts. DAE, which I pronounce as day, is an acronym for Digital Audio Extraction, also known as ripping audio CDs. The scripts are a wrapper for a command that has only a few options yet I have no way to remember the command options that I may not use again for awhile. Hence I created these basic scripts. They are straightforward scripts that just cover the essentials.

(These scripts are only basic wrappers, most of the work is done by the RipIt developer(s)… I thank them very much for their effort.)

There are two scripts. They are demonstrated here in use, as it is the best way to describe them. 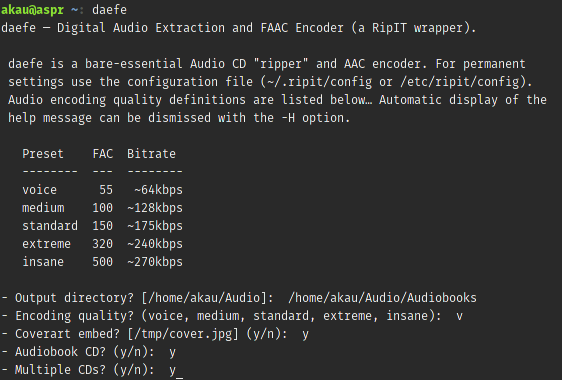 After these steps RipIt does a CDDB query from the Internet (if available) and allows tag editing if desired.

I bypassed adding a few settings in the script and rather allowed them to be specified in the RipIt configuration file as their values will likely remain the same:

The daefe script can also be used for audiobooks. The procedure encodes an entire CD to a file and writes a track/chapter index to another file. The chapter index file can be merged into the audiobook for an integrated audiobook, read ArchWiki:Audiobook for more details.

Both scripts have error checking and I consider them reliable. I have put them in a repository for anyone interested.

Here is a gathering place to share common bits of Linux knowledge. Learning with the operating system is a hobby for me. I enjoy getting along with people and being part of something everyone can contribute to. Comments, tips all liked.

If desired you can learn more about me or view the number of scripts I've wrote.