When I looked at my audio files recently, I realized that that I wanted them organized in a consistent way. As it were naming standards varied, some tags were missing, different encoding types were used… I decided I was gonna Feng Shui my way out of it.

I decided there should be consistent naming and it should be condensed as much as possible, yet still being understandable.

For the directory format I use $artist—$album. For many people the format is $artist/$album, however, I came to the term that I would have to have about 100 CDs in my collection before the list would get too cumbersome to navigate.

There is another program that organizes multiple CDs in this fashion and I like the thought behind it.

I had been creating high-quality MP3s (256kbps) and just accidentally stumbled into trying MP4s—and was delighted by the difference. Similar bitrates of audio sounded fractionally, but for me, appreciatively better. So I encoded all CDs to .m4a (MPEG-4 audio extension). (I will probably go to loss-free audio format in the future if the gods favor.)

By the way, I think (clearly subjectively) that FAAC (Free Advanced Audio Coding encoder) is great. It mentions in the manual that “it is not up to par with the currently best AAC encoders” but from my semi-proficient audio setup it did well.

I tested encoding with a FAAC at a setting of 320 (~256kbps) versus the iTunes setting of 256kbps. I did find iTunes better. Audiophiles looking for every detail might talk but for me difference could be left alone.

Here is a partially non-scientific (but should be fairly representative) graph of FAAC’s quality settings compared to kilobytes per second: 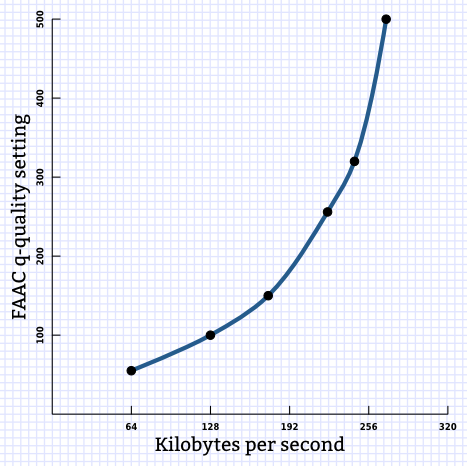 I can verify for the first and fourth values as I have tested a number of times. The second and third values I got from hydrogen audio. The fifth value is a projected value based from the other values.

A FAAC setting of 150 has been recommended for “casual, non-critical listening”; however, I use FAAC 320 for my tunes and 55 for voice. Though similar bitrates to the iTunes encoder created slightly less quality, the file size reflected too: iTunes 8.4MB, FAAC 7.6MB.)

Software audio players that I have used tended to put a some extraneous files in my audio folders. I’ve seen album cover art put here, lyrics, some unnecessary metadata, and hidden folders. I did myself a favor and deleted them out. Nothing should be here but the audio files. If an audio player insists on putting stuff here, I would recommend to their users to file a bug so the developer can remedy it. Some may argue that album playlists should be put here but these I believe belong to saving along with the configuration files.

I discovered a nice feature call the audiobook format. Instead of 100 tracks splayed over a directory, or directories, from a audiobook CD, I can reduce this to a reasonable amount (say, one file per disc or even less if I choose). These book formats can also contain chapter indexes so navigating a file is just like navigating a disc. The process isn’t incredibly difficult and I documented it here. If the audio player supports them, it is a nice feature.

Being a Type A personality, I’ve probably thought more about this than many. I have a certain organizational style and formatting schema that I consistently think about.

I keep all my home directories about the same as everyone:

One exception to the above is the “Audio” directory which I use for multiple audio types:

The other exceptions is I also hide the Templates directory (.Templates) as I don’t use it often.

Even though I use GNOME I’ve enabled the Desktop—this is my workspace. If I can see them, I can remember them.

I’ve come to be a big fan of VCSs. If I build something that others can use on their computer, I’ll create a VCS for it. I’ve put all of these VCS directories in their own directory:

I put all the Documents in one directory whether I wrote them or obtained them:

I do the same with Pictures as I do my Documents; whether I designed, photographed, or obtained them, I put them here:

For the major folders, I use single words with the first letter uppercase. For files and other folders, I try to keep to the somewhat-traditional Linux method of naming my files as lowercase. For spaces in files, I generally use a hyphen (-) which I see used a lot these days though I think an underscore was originally used. Underscores I will use if there is a category I would like separated in the name (portrait-of-bach_etching.svg).

Read this post to learn how I organize my audio files.

When I come across a file that I won’t use anymore, is outdated, a misdirection, I create a folder called _vault and I place them in it. I then always have them around as I find that sometimes I like to.

The bash shell’s setting file is a really nice this to have detailed. Therefore I looked into it pretty good. For any that would like to use it, it can be found in the AUR.

Update: This turns out to be done by xrandr which the X.org server hands off to now for dynamic use of monitors. man xrandr even reports that it is trying to keepaconstant DPI. Not sure just why it is doing it, but found a good way to get it done.

I just got a new monitor to be able to use as an external monitor for my laptop. While I was setting it up I noticed that the monitors display size wasn’t correctly detected. The Xorg server does a good job auto-configuring however this caught my eye:

The monitor I got is a 21.5″ monitor so I figured the DPI was off. I decided to calculate it myself (this is a square pixel monitor):

Also there are online DPI Calculators conferred by doubt (1, 2,) and xrandr:

Arch Linux and most distros use /etc/X11/xorg.conf.d/. However this won’t work on the external monitor. So I expanded on it (more than it probably needed to be) by defining both monitors and related sections:

I added VendorName and ModelName but I’m not sure they uniquely define the monitor so that the Xorg server acknowledges them. The VendorName I believe is just for reference, ModelName can usually be discovered by doing:

Monitor-VGA-0 and Monitor-LVDS define the ports and hence by reference should uniquely define the monitor (xrandr -q shows them and both are found in the Xorg log).

After a bit of research I discovered that there is a good amount of history concerning the Xorg server having a bit of trouble in not being able to correctly discover the display size. I believe this may be related to some drivers. I’ve been told the open-source ATI driver have had problems and read in some other places of other people who have had similar issues. Defining the display size in the configuration and telling the Xorg server not to use the auto-detected value can be done by adding this to the Devices section (for Nvidia drivers use: Option "UseEDID" "FALSE"):

Unfortunately, this didn’t work either and left me completely at a loss. Unsure how to go further to define display size in the the Xorg server configuration I decided to define it through xrandr.

xrandr has an option to define the display size with the --fbmm option:

--auto uses the default/preferred mode of the monitor.

I know what partitions I have and like to know what is mounted and where. To do this, I keep a tidy static filesystem file (/etc/fstab).

I use labels instead of UUID’s just because they look nicer, but also because this allows me to resize them if need be. It’s hard to go wrong with UUID’s but since I know I likely won’t be putting a USB drive named ‘Windows’ or ‘DisrtoX’ in the USB port, I’m likely pretty safe. You may have noticed too that I choose not let HAL/DBUS (is it dbus that does mounting now?) handle my Windows and Storage partitions. I choose to do this for several reasons. One is because when I copy files I almost always find it much quicker from the command line (i.e. cp file1 file2 ... /mnt/Storage/backups/) rather than navigate through multiple directories in the file browser. The second reason is for security because sensitive data I don’t always want available. The third is to protect the Windows partition. If a crash were to happen, I find it a good inconvenience to have to boot Windows to be able to fix the NTFS volume.

noatime has been applied to save disk writes and unnecessary timestamps everytime the file is accessed, and the user option allows me to mount without superuser privileges.

A browser that can get the job done for me is all I need. Firefox has been good enough for me. It is ready to go from the installation. I find a few touch-ups can help me out a bit.

The edits I make are listed below followed by their description. The configuration editor I use which makes editing them a bit quicker for me. The editor can be opened by typing about:config in the URL bar.

Firefox has a couple themes in its options. I like that compact light one.

For typefaces I like to use various Microsoft fonts. These are the fonts I use and their sizes:

I created a webpage to look into what typefaces to use and their sizes; it can be downloaded here.

For my needs Firefox has most of the abilities built-in. There are a few that are well designed that I have learned to trust:

Man pages by default use less for displaying. I’ve used vim before to for colored text in man pages but something got bjorked in an update. To have color with man pages termcap will need to be invoked. Thanks to nico for the tip.

All that needs to be done is to export bold and underline values of termcap. Adding the values to the ~/.bashrc will make sure that they are always used:

And source the ~/.bashrc to have it work:

Some may notice I used Arch colors :) :

Here is a gathering place to share common bits of Linux knowledge. Learning with the operating system is a hobby for me. I enjoy getting along with people and being part of something everyone can contribute to. Comments, tips all liked.

If desired you can learn more about me or view the number of scripts I've wrote.